If you are a vigorous reader then you probably have a group of friends who are also bookworms like you. If you don’t then you would have at least a few people crazy about books around you. When you have friends that also read a lot like you, you’re always exchanging books and giving recommendations. I think we all as bibliophiles have been recommended classical literary works of the masters of literature. Reading classics is such a learning experience because these are the kings of literature, people who have broken limits in an era where everything, even creativity was imprisoned.

I mean if you are looking for a worthy book to read you can never go wrong with a classic. It always astounds you, the plot, the storyline, the characters and the background. All of it is quite mind capturing but sometimes classics do also tend to bore you. You either don’t seem to understand it because it’s really historic and you are not familiar with the representations and the epithets. Regardless everyone has their own way of reading and their own favorite genres and authors.

A Tale of Two Cities was a really knowledgeable and interesting experience like one I ‘ve never had before with any other book. First of all, this was a syllabus book for me, meaning that this was a part of my English literature syllabus for my 2nd Term of 8th Grade. Before that I had not read any of Dickens’ novels even though I had been recommended a lot of them but I don’t really listen to what people say. Anyways in this case there was no way out of it and I just had to read it and put my heart, soul and attention into it because my grades were on the line. I actually have quite a history with this historical artwork but before that lets see the plot and the characters.

A Tale of Two Cities is a novel written by Charles Dickens published in 1859. Charles John Huffam Dickens was born on February 7th 1812 in England. He has seen life from many different mirrors being a novelist, journalist, illustrator and editor. He has written many books and each of them are phenomenal literary pieces of art. He died on 9th June 1870 due to a stroke. Here is the list of his most well-known works:

A Tale of Two Cities is a literary classical artwork. The plot of the book is quite perplexing but it just takes attention, focus and time and all of that is worth it for this book. Although if you are someone who needs a lot of attention to read a book, it might take you some while to get along with it. The descriptions are sometimes tedious and long and they might throw you off but it is worth it for people who love historical fiction.

The book is about two cities, Paris and London. It is actually based on a revolt in history, the French Revolution of the 18th Century. It was basically an uprising of the bourgeoisie against the clergy and the First state. The book is basically based on that. The complete novel is divided into three books:

I am not going to go into too much detail with the plot. The plot of the whole novel is basically about Charles Darnay who tries to run from his original identity as a French aristocrat. He meets Sydney Carton who is his look-alike but in actuality nothing more than a drunkard who has given up on life. They both fall for the same girl, Lucie Manette but Charles ends up marrying her. In the end Sydney goes to guillotine and gives up his life so that Lucie and Charles could have a joyous life together. The relations that are formed between the characters are ironic but I would say that the whole book is basically a representation of the cruelty of the French aristocracy at that time and then the uprising of the bourgeoisie and the middle class against them but the uprising tips more towards revenge rather than revolution showing that two wrongs don’t make a right.

The main characters of the book include: 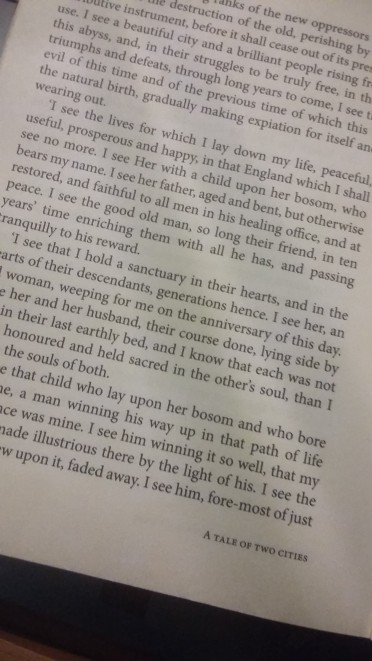 My Review and Experience

A Tale of Two Cities was a book that came with a lot of unsaid words and ideals that have not been paid attention to. Topics like how the rich manipulate the poor and how fate rules us all and our circumstances. Discussions on how souls die while the body lives and regardless of it, generosity doesn’t leave its place. The description was long and sometimes tedious and confusing but it did retain its classical position and fulfilled the wildest of my expectations.

The first thing I loved about the book was the intensity of the plot and how everything is interconnected with the other. Every simple occasion or occurrence in the book appears to be highly important later on and astounds you with its intensity. The plot seems to be very simple with the use of words by one’s own tongue but while reading the actual book there’s a lot to pay attention to. It is a book that demands a lot of time, concentration and effort but rewards with words of wisdom which is all that one can ask for.

Another great thing about the book that I rarely come across is the depth with which each character is build. Each character in the book has a mandatory part to play in the plot and each one of them is transformed with unfathomable depth and there is a whole story behind them that each one of their tales could be a whole legend. In fact I love the irony between the characters that is shown but then they are discovered to be similar in infinite ways as well. Regardless, A Tale of Two Cities has contributed another worthy character to my list of favorite literary characters and that happens to be Sydney Carton a character of limitless depth and meaning and whose soul has died but then he gives up his physical body as well for the lives of those he loves.

One more tenet that I appreciate about the book is that the novelist creates many situations and when all of them are merged together they inject a meaning or a statement as if the author wants to prove something or some statement and he does so by creating limitless situations. For example Charles Dickens creates Jacques which are revolutionaries who bring up the French Revolution and every person who is a revolutionary adopts the title of Jacques to identify themselves and to remain anonymous with their original Christen name. The Jacques are seen to bring about Revolution for the better but as the story progresses their Revolution shifts more towards revenge proving that “two wrongs don’t make a right”. Here this statement is being proved by a whole story and situation behind it.

Dickens uses a wide variety of symbolism and foreshadowing to add curiosity in the plot. For example in the fifth chapter of the first book he creates a situation where the wine barrel breaks and the wine is spilt in front of the wine shop in Saint Antoine in Paris. The spilling of the wine later foreshadows the spilling of another kind of liquid, blood when the French Revolution will begin and just like the wine, the blood of people will also be spilt on the street-stones. An example for symbolism is that the Manette’s household is right around the street’s corner in Soho and they are able to hear the footsteps of people passing by the street. Lucie Manette symbolises the footsteps on the street to be the footsteps of the people who are going to walk in and out of their lives.

The symbols and the foreshadowing keeps the interest and the inquisition of the reader strong and also adds a twist to the plot like spice in a chai latte. However at the same time you also need more concentration and analytic skills to analyse and identify symbols and foreshadowing throughout the book. I greatly appreciate the use of eccentric and valuable vocabulary because while reading the text you’ll surely come across many words that you are unfamiliar with so don’t read this book without a pocket dictionary with you. Regardless this book improved my vocabulary a lot and I learned a lot about the French Revolution and about 18th Century England and France and also about the Victorian era. This will surely enhance your general and historic knowledge.

However it might take you some time to read this book but it mainly depends on how quick your reading time is. Generally the whole book is about 500+ pages. It took me a lot of time to read it since I am a slow reader but also because since this was a syllabus book for me so there were a lot of formalities that I had to account to but regardless it is a book worthy for your time and is a must for bookworms and bibliophiles.

My Favourite Lines From the Whole Book

Here are a few lines from the book A Tale of Two Cities by Charles Dickens that have stayed with me:

(P.S. All of these quotes/lines ARE from A Tale of Two Cities and they are written by Charles Dickens, I was just too lazy to write it besides every line.)

– Charles Dickens in A Tale of Two Cities

One thought on ““A Tale of Two Cities” by Charles Dickens”