We say art surrounds us, encases us like a blanket full of colors and ideas that have never been thought about, designs that have never been created and creativity that has never been spotted. If we are adept at saying life itself is art then what about death. Should death be left behind? Well, no. Death cannot be left behind because it is waiting for us at the end of the line. However death is a fact but if someone can’t bear to see it, they call it the Art of the Final Moment.

If I was to summarise this book in a statement I would use the one that has often been used in this book itself and is in fact the whole foundation on which the plot and the synopsis rests upon, “Art of the Final Moment”. This statement is the foundation, the climax and the conclusion of the book. Now by this time you might think that I am nonsensical but the surprising element of this book is that it combines two of my most respected phenomena, art and death. 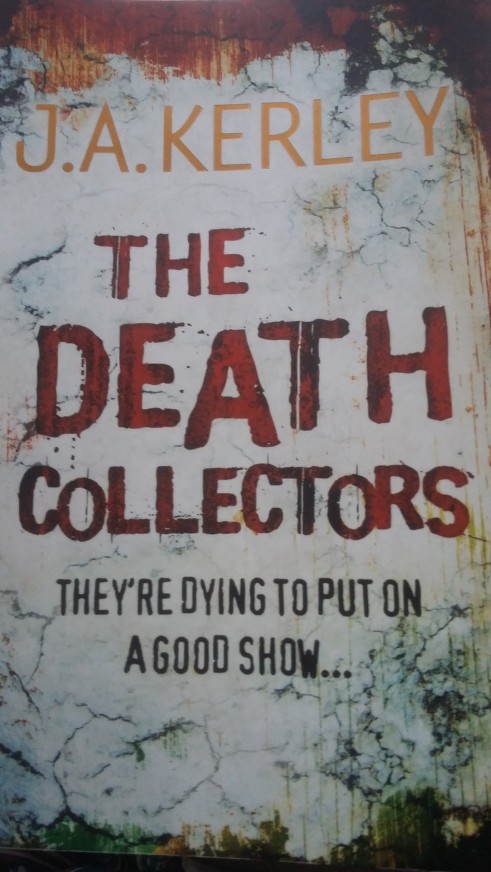 This is in fact the beauty of picking books at the library or the bookstore, you never know what’s in store for you. A week ago I was buying books and I was looking for a mystery thriller because I hadn’t read one for a long time. In the bookstore I was just exiting the last aisle before I had to pay for my books that I happened to stumble across this book of J.A. Kerley. By then I just realized that I hadn’t bought a book related to murders even though I had bought the first volume of Sherlock Holmes but I still wanted to buy another one. Anyways, I looked at this book and when I read the blurb and I came across the statement, “Art of the Final Moment” I apprehended that it is going to include in fact three of my most inquisitive topics, Art, Detectives and Death.

When I started reading the book and by the time I finished it, all along I was really intrigued by the idea of combining art with death and I will get more into this when I tell you guys my experience. Before I get into that I just want to say that in no way do I want to offend the deceased or death itself. Death is a fact of life and in no way I offer disrespect to it. Everything that I am stating is purely my perception and I hope it doesn’t offend anyone.

The Author, Plot and More Information

The author of the book The Death Collectors is J.A. Kerley who is an American author. The following information is from his bio in the start of the book. He used to work in advertising and teaching before he became a full-time novelist. He lives in Newport, Kentucky and is married and has two children. This novel, The Death Collectors is basically from his Carson Ryder Series which starts from the book The Hundredth Man.

The main characters of the story are:

My Review and Experience

The Death Collectors is quite an interesting book especially for those who are interested in art because the whole foundation of the book is related to art and its relation with death. I have thought about merging the phenomena of art and death before but it always kind of felt weird to me and I felt as if I was being disrespectful but I like the way this book has merged the two phenomena in such an eccentric way that it is a must read. It actually didn’t take me that long to finish reading it even though I am a really slow reader for someone who reads a lot. However if you are someone who has a good reading speed then this is easily a one day reading book for you.

The few tenets that I actually did like about the plot was that throughout the book, the Art of the Final Moment was used pretty carefully as if not to disrespect death but still the emphasis was being laid. I was pretty astounded by the plot and if I would have to visually describe it, it would be like a smooth, long slate of concrete with characters standing motionless here and there and each character seems worlds apart from the other but right beneath the concrete every character is connected with millions of strings, like a whole network of wires. This is why you never know what to expect at any moment.

Another great thing is that every situation is formed in divergence to the other and they seem to be voids apart but still somehow they are revealed to be logically connected i the plot. That just blows you off. The characters themselves are nicely built and portrayed but I wish that they would have more depth to them. I do understand that the characters are built through each book of the series but there should be a little more depth to them.

One more con regarding the book was this that the art wasn’t quite descriptive. Although there were occasions where the art was explained but the attention was diverted more towards the crimes and the murders that I felt as if there should also be a more illustrative description of artwork to equally include both the voids especially if you are including art in the plot and the background. Nonetheless it was a great experience and I was quite intrigued by the idea of the plot and I am also quite excited to read other parts of the Carson Ryder Series.

“This suspense is terrible. I hope it will last.”